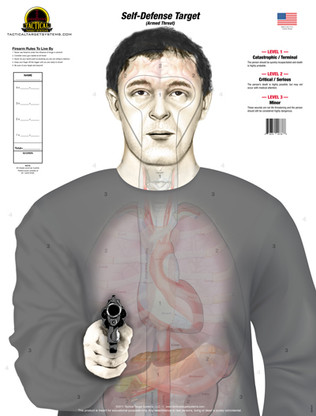 The "Armed Threat" (Self-Defense Target) design replaces the standard human silhouette target with an anatomically accurate torso holding a handgun. It features true to size organs and vital areas of a smaller human male. This target is divided into three “SCORING LEVELS” which consist of the following: LEVEL 1- Catastrophic/Terminal, LEVEL 2- Critical/Serious, and LEVEL 3- Minor.  Shots placed on this target give the shooter a realistic idea of what effects their shots would have on an actual human.  The organs and vitals are faint at distance which creates a more realistic view of an adversary down range, because real bad guys don't come with bulls-eyes!

This target is also available in Greyscale.

Designed to test speed and accuracy of the "three shot" self-defense/threat elimination shooting technique taught by most firearm instructors and police departments.